First minted in 1921, the Mexican 50 Peso gold coin hold special meaning to the people of Mexico with its design. 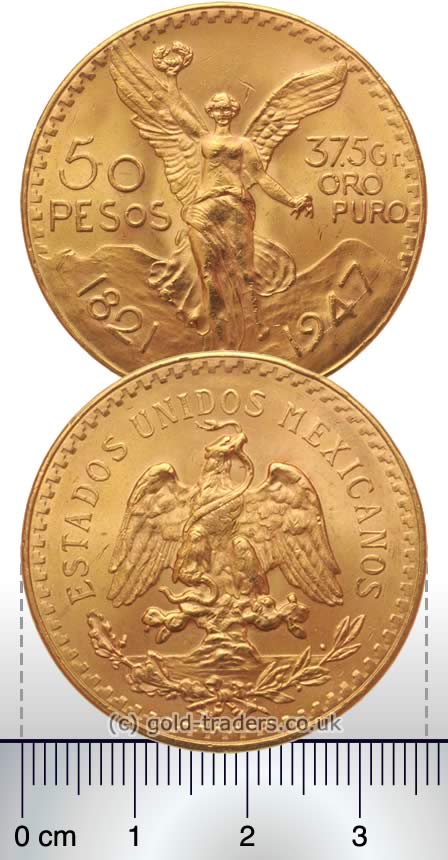 In 1910, the country commemorated the one hundredth year since the beginning of its War of Independence with Spain.

To celebrate their freedom on this centennial event, a giant column bearing a statue influenced by the ancient Greeks was erected in Mexico City. The statue was the winged Nike, or Victory, and she stood 6.7 meters tall. Composed of bronze and gold, the figure was dubbed the Angel of Independence. The Angel of Independence statue has two unique items in her hands: A laurel crown, an obvious gesture of victory as Greek champions were often awarded laurels for their victories, and a broken chain, symbolizing freedom from oppression and bondage. This statue, and the proud spirit she represents, were depicted on the obverse face design of the Mexican 50 Peso coin.

On the reverse side of the coin, the Mexican coat of arms is displayed. The main feature of this coat of arms is a proud eagle, perched atop a cactus, feeding upon a snake. Even this coat of arms is rich in symbolism as the design came from an Aztec legend where they were told by their gods to establish a city upon the spot where they witnessed an eagle on a prickly pear cactus eating a serpent. As legend would have it, this spot is the present day location of Mexico City.

Of interesting note, the Mexican 50 Peso gold coin was produced prior to the time of the South African Krugerrand and, during the period prior to 1967, it was one of a very few gold bullion coins available on the global front. The total gold content of the Mexican 50 Peso coin is 1.2057 Troy Ounces and the coins commonly sell for a small premium above the gold contents value.

The Mexican 50 Peso coin was minted from 1921 to 1947 but an additional 4 million coins were issued between 1949 and 1972. Of these 4 million coins, nearly all of them are dated 1947. There is also one unknown factor in the history of the Mexican 50 Peso coin. In the year 1943, the weight of the coin is included on both sides of the Angel of Independence figure in the obverse design but the denomination is not included, which normally resides to the left of the figure. It is unknown whether this was an intentional design change or an accident. What is known is that the change only occurred in coins from that one year and the production returned to the regular design in the following year.

In 1994, Mexico was hit with economic turmoil. Investors scrambled to get their money out of stocks and there were massive runs on the banks to get money out before the economy completely collapsed. Those who had invested in gold, including the purchase of Mexican 50 Peso gold coins before this economic meltdown quickly learned that their gold was a safe investment. Gold made rapid climbs in value from just 1200 Pesos per ounce to 2500 Pesos and past 3000 Pesos per ounce in 1995, just one year after the economic crash. With the Mexican 50 Peso coin's gold content of just over 1.2 troy ounces, the coins would have been worth 24 times their face value immediately after the crash was announced and 60 times their face value one year after the economy crashed.