Austria began the production of its own Ducats in the early 16th century and they continued to be the official legal tender of Austria until 1858. 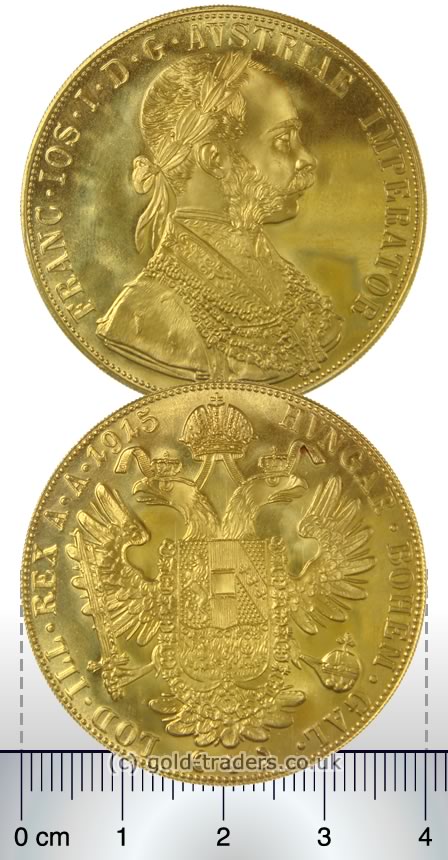 At this time, the Austrian Ducat was scheduled to lose its status as legal tender in 1858 but it was saved from fading into history by the Emperor of Austria who issued a proclamation approving the Austrian Ducat for further production as a trade coin in the year 1857.

With their reprieve, the one Ducat coins and the four Ducat coins continued to be produced every year until 1915, when the rigors of World War I began to take it's toll on the country of Austria and forced the end of the Austrian Ducat as well as the other gold bullion coins in Austria.

The Austrian One Ducat's and Four Ducat's obverse sides bear the likeness of the Austrian Emperor and King of Hungary, Franz Josef I, the last great monarch of Europe, who ruled over Austria and Hungary for 70 years until his death in 1916. During the course of his rule, history witnessed the execution of the Emperors brother,Maximillian, the suicide of his son, Rudolph, who was found alongside his mistress, the murder of his wife, Elisabeth, and the assassination of the Emperors nephew and heir, Francis Ferdinand, which many people cite as the beginning of World War I.

The reverse side of the Austrian One Ducat shows the fierce double-headed imperial eagle of the Hapsburg dynasty. Due to the fact that the Hapsburg emperors believed that they had inherited the Holy Roman Empire and thus the world, they designed the double headed eagle which was able to look both east and west at the same time. The double headed eagle holds a sword and scepter in its right talon and a cross-bearing orb in the left.

Interesting Facts About The Austrian Ducat

The Austrian One Ducat bears the names of both Austria and Hungary. This is due to the fact that Franz Josef I ruled over both countries during his lifetime. Franz Josef I became Emperor of Austria in 1848 and took on the dual role as King of Hungary in 1867. He successfully ruled both countries until his death in 1916.

The Austrian Ducat has been restruck by the Austrian Mint AG from 1920 to 1936 and a few times afterwards but the latest date that will be found on any authentic Austrian Ducat is 1915.   When the mint was officially ended at the beginning of World War I, the 1915 coins forward were restrikes of the 1914 Ducat.