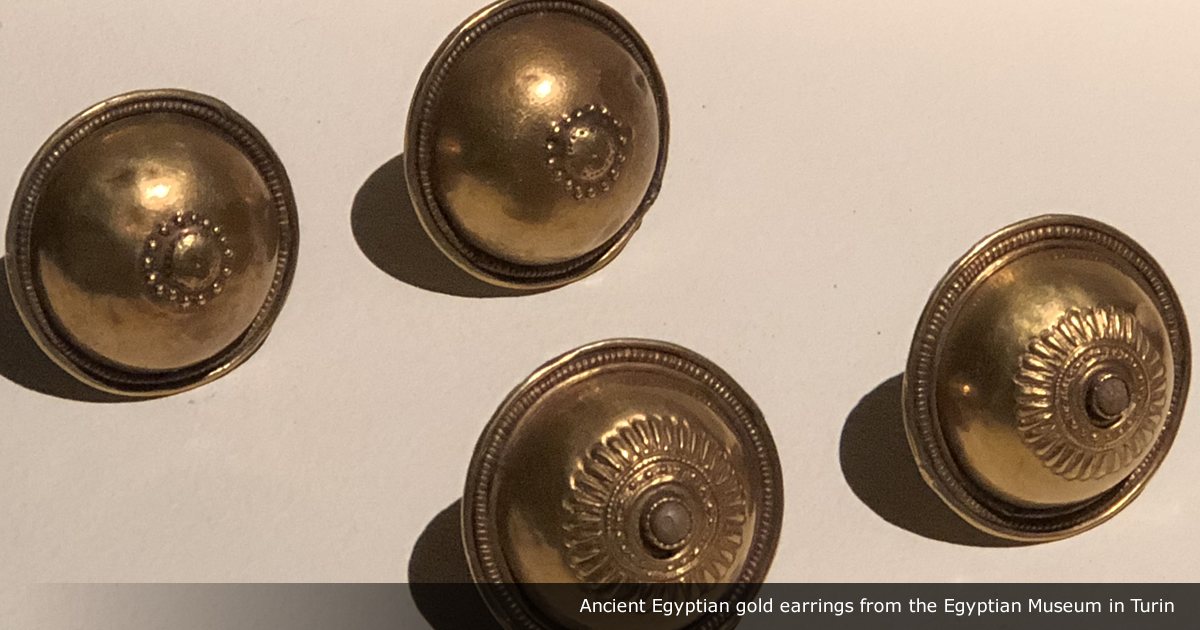 Since the time of our most ancient civilisations, we have used gold to decorate our bodies and our most precious objects, and to make coins and currencies around the world.

In today’s society, the gold in our coins have been replaced by metals like copper and nickel that only look gold-coloured. However, we still like to ornament ourselves with this precious metal. The vast majority of gold produced and used each year continues to be made into jewellery, from wedding rings to gold watches to tiaras. However gold has many more uses and roles to play in our twenty first century world.

The art of gold 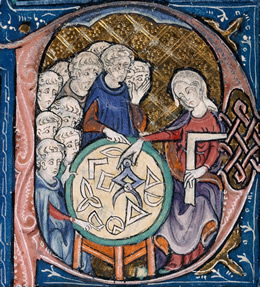 Illuminated manuscript with gold from the British Library c 1309

The beautiful sheen and shine of gold has long been used to embellish and produce works of art and craft. Gold can be made into a powder, mixed with paint and used to create pictures. Medieval scribes used this method to make illuminated manuscripts and applied gold to highlight the lettering and borders in hand written books.

The ability of gold to be hammered into thin sheets called gold leaf makes it easy for artists to apply it to objects. It is also much less costly to apply a layer of gold rather than making a solid gold object. Modern artists like Jeff Koons continue to use gilding in their works such as his provocative sculpture of Michael Jackson and Bubbles.

Gold is highly ductile – that means it can be beaten to a thinness of 1/282,000 inch and pulled into fine threads. European goldsmiths in the twelfth century made cloth of gold for members of royalty and the aristocracy. Gold continues to be used in our modern fashion industry, especially for the most glamourous outfits and events. Gold lamé is made from thin strips of metallic fibre woven or knit into fabric. It reached the height of its popularity in 1930s Hollywood when actresses wore gold lamé gowns on the screen during the Great Depression. Ironically the audience couldn’t see the colour as the films were made in black and white – but the dresses still had an amazing sheen and flow on camera. Portrait of Diane de Poitiers. When the remains of her hair was tested in 2009, tests found traces of gold chloride and diethyl ether, suggesting that de Poitiers died of chronic gold poisoning.

In the Middle Ages people thought that gold had miraculous powers. They believed that if they could find the right recipe for a drink made out of gold, it could act as an elixir of youth.  Noblewomen like Diane de Poitiers in the sixteenth century drank ‘potable’ gold to try to stay young. Unfortunately consuming gold in large quantities can be toxic.

When the remains of her hair was tested in 2009, tests found traces of gold chloride and diethyl ether, suggesting that de Poitiers died of chronic gold poisoning.

In modern medicine small amounts of gold can be prescribed as a remedy. Sufferers of rheumatoid arthritis can use a gold compound as an anti-inflammatory. Doctors are currently researching the use of tiny gold fragments known as nanoparticles in new cancer treatments.

As gold is nonreactive and resistant to bacterial infections, it is used in implants for the inner ear and pacemakers as well as some medical equipment such as surgical tools and life support devices.

However, the main medical use of gold is for dentistry. This is nothing new.  Records from 700 B.C. show the Etruscans used gold wires to create dental bridges. Gold was used to make false teeth because it could be easily shaped and was biocompatible – meaning it doesn’t cause a reaction when placed in a human body. Some people and cultures have also used gold teeth as a visible sign of their wealth.

Today, gold is mainly used in dentistry for bridges, fillings, crowns, and orthodontic appliances because it still lasts longer than other dental materials. What was once medical necessity has become a fashion for some. Grillz – false teeth covers made of metal – are popular in hip hop culture and worn by celebrities like Miley Cyrus and Madonna.

Whilst eating gold is not going to cause any tooth decay, it will not provide any nutritional value either. Edible gold is a special nontoxic form of the metal which actually costs more to produce than non-edible gold. It has no taste or texture and will not be absorbed by the body. 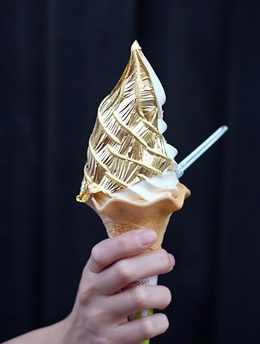 However in Japan, there is a growing trend for consuming gold. The city of Kanazawa produces 98 percent of all gold leaf in Japan. One of the most popular tourist activities there is trying food and drinks covered with thin gold sheets and flakes. Visitors can sample gold-topped ice cream, shakes and even sushi.

In the UK you can buy Goldschlager cinnamon schnapps which has floating flakes of 24 carat gold. Some London restaurants have also created extravagant dishes with edible gold such as the Bombay Brasserie in Kensington. Its Samundari Khazana curry, meaning ‘seafood treasure’, included Beluga caviar-fllled cherry tomatoes wrapped in gold leaf.

Our modern world has found different uses for gold. Indeed much of our society relies on it. The unique properties of gold have aided the development of new technology such as the transistor and the microchip.

Transistors are a type of electronic switch. They act as a semiconductor device used to amplify or switch electronic signals and electrical power. One of the first transistors invented was made out of two gold foil contacts sitting on a germanium crystal. Microchips are made up out of transistors. They act as small units of computer circuitry used for computer memory or program logic.

Both transistors and microchips contain a fine gold wire to connect the different components and make connections. Electronic voltages and currents are easily interrupted by metal that corrodes or tarnishes. Therefore a small amount of gold is used in many electronic devices because it’s impervious to humidity or corrosion.

The invention of the transistor and microchip have transformed the world of electronics and computer design. Our mobile phone’s connectors, switches and relay contacts all contain gold. Both desktop computers and laptops contain gold in their connectors. Items from alarm clocks to microwaves to televisions, even washing machines contain a little gold. Although we can’t see it, our twenty-first century society depends on the use of the gold in much of our technology.

In 1977 the Voyager 1 and 2 space probes were launched. They contained phonograph records constructed out of gold. These records contain greetings, sounds and music to show what life on Earth is like. They are intended as a sort of time capsule for anyone – extraterrestrial life forms or future humans – who may find them. The records were made out of gold-plated copper to best preserve them in the atmosphere of space. The Voyager probes continue to sail on, drifting towards the furthest borders of our solar system. Pic: Cover for the Voyager 1 and 2 “Sounds of Earth” gold-plated records. The diagram on the cover provides the finder with a key to playing the record.

Gold has a particularly useful quality for space travel. It is able to reflect infrared radiation. For this reason it is used on astronaut outfits, especially the visor. Space vessels also have a layer of gold coated polyester which reflects harmful rays and helps stabilize core temperatures inside. The gold in the onboard electronic devices have an added benefit in the vacuum of space as they act as a lubricant between the mechanical moving parts. 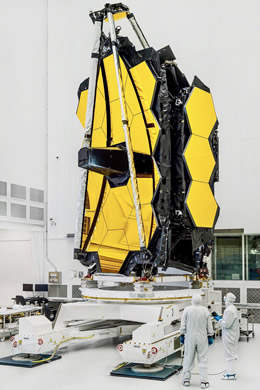 In 2020 NASA’s James Webb Space telescope is due to launch into space. The particular quality of gold that makes it so suitable for space use will actually form the basis of this experiment. The telescope’s mirrors are coated with a microscopic gold film that reflects infrared light from space to allow it to be studied by the telescope’s own instruments.

As our technology continues to grow and change, we can’t predict what the future holds in store. One thing we can be certain of however, the unique qualities of gold means it will continue to play many different roles in our society.

Click here to cancel reply.
November 7th, 2019 No Comments » Miscellaneous |
You can skip to the end and leave a response.
« Bullion by post
What is an XRF Machine? »