As an established scrap gold dealer, we’ve recently been contacted by a member of the public who’s been offered for sale a quantity of Alluvial Gold Dust. Wanting to know whether the offer was genuine, they contacted us for advice.

Here’s the original e-mail they received:

GOLD AND DIAMOND FOR SELL

It’s my pleasure contacting you to inform you about our product “Alluvial Diamond and Gold Dust”. I am a Gold and Diamond Dealer here in Cote D’Ivoire, Ghana and London.

We are having in stock right now 450kg of Alluvial Gold Dust advertising to seek of buyers assistance in helping us buy Gold Dust Or Diamond and sale on her own location.

Our F.C.O is described as follows:

Terms and Condition: I will be very grateful if you can come down here and do inspection of the goods properly before we commence shipment. I agree to follow the lot with you to your country and get paid after the final assay and refinery in your own location here in Cote D’Ivoire, Ghana, Or London. I Mr. ###, From Abidjan, Cote D’Ivoire in West Africa.

What is Alluvial Gold Dust?

The term ‘Alluvial’ is used to describe:

A deposition of sediment over a long period of time by a river; an alluvial layer.
Source: wiktionary.org

Or, to put it in simple terms, river mud.

Now, on the face of it, this ‘offer’ looks quite attractive. 450kg of 22ct gold, albeit in ‘dust’ form, would be worth somewhere in the region of £10.5 million. An opportunity for an investor to make a healthy profit perhaps?

Well, no, of course not.

Bear in mind that a typical gold mine will yield somewhere in the region of 3 grams of gold for every ton of rock excavated. They wouldn’t be going to all this effort if they could dredge river mud and yield a higher return! Anyone with a source of gold at this purity wouldn’t need to be hawking it on the Internet.

Our advice: Please steer well clear of these e-mails. We receive similar correspondence every day, all of which is filed in our ‘spam’ folder.

Remember the old adage – if it’s too good to be true, it probably is. 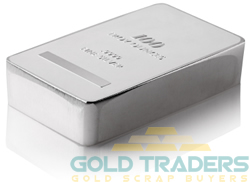 One of the best known precious metals, Silver has a rich history.  Silver has been used by man for thousands of years and, in ancient times, it was considered to be the second most valuable precious metal with Gold being the first. This is very interesting when you consider that the value of silver has never achieved a price of more than 1/10th of the gold price. In this article, we take a look at some interesting facts abouts silver.

Silver has the chemical symbol Ag, a shortened form of its Latin name, Argentum, which has been translated to mean “white” or “shiny”. The word ‘Silver’ originates from the old English Anglo-Saxon word ‘seolfor’.

Silver in the Holy Books

While silver was largely used for ornaments, jewellery and utensils, it has also been used for trade currencies.  The biblical account of Jesus Christ’s betrayal remarks that Judas Iscariot betrayed Christ for 30 pieces of silver, the book of Genesis describes silver as already being used by early people and countless other biblical and historical references point to trading being handled with silver as the currency from the fourth millennium B.C. Silver also found it’s place into non Christian religious records. The Muslim holy man, Muhammad, is said to have worn a silver signet ring, making silver jewellery one of the few accepted forms of ornamentation for men of the Islamic faith.

The Ancient & Antibacterial Properties of Silver

Since silver possesses antibacterial properties, it has been used for medicinal purposes since the time of the Ancient Greeks. The Ancient Greek and Roman people used silver to prevent infection and the stability of the Roman economy was dependent upon the supplies of silver that were mined at a rate of about 200 tonnes per year, creating a Roman silver supply of nearly 10,000 tonnes in the 2nd century A.D.

During the Middle Ages, the antibacterial properties of silver were also used to disinfect water supplies and protect food supplies during long term storage. Around this same time period, the European people also developed the technique of using silver for the treatment of burn and wound victims, using the silver as a dressing for their injuries.

By the 19th century, sailors had discovered that placing silver coins into the barrels of water and wine they carried would keep these perishable commodities pure from contamination by bacteria, a trick that was then adopted by the early settlers of the American west.  In fact, this use for silver has proven to be so effective that, in 1920, the U.S. Food & Drug Administration (US FDA) approved silver solutions as food safe antibacterial agents.

The Current Uses of Silver

Although modern man still uses silver for its traditional usage in jewellery, ornaments, silverware, tableware and coins, we haven’t stopped with just the common uses. Modern science has also discovered the uses of silver for the manufacture of mirrors, clothing, electrical circuitry, photography, dentistry and medical uses, as well as its catalytic properties which lead to silvers use in control rods for nuclear reactors and industrial applications.

The high electrical conductivity of this metal has made it useful for electrical applications, particularly audio cables, but it has largely been avoided due to high cost and the problems associated with tarnishing, the oxidation of silver when it comes into contact with air or water containing ozone, sulfur or hydrogen sulfide. Despite these detractors, 13,540 tonnes of silver were used to build magnets during World War II for the process of enriching uranium because of the short supply of the more economical copper.

Where is silver found?

While silver is found on every continent of the world, the majority of silver being mined today is found in Peru and Mexico, where the metal has been mined since 1546.

Silver is found in its pure form in nature. It also can be found alloyed with gold and other metals or in the presence of minerals, such as argentite and chlorargyrite. Most of the silver being mined today is a by-product of the production and refining process of other metals, such as copper, gold, lead, and zinc.

Some Interesting Facts About Silver

Other relevant pages about silver: