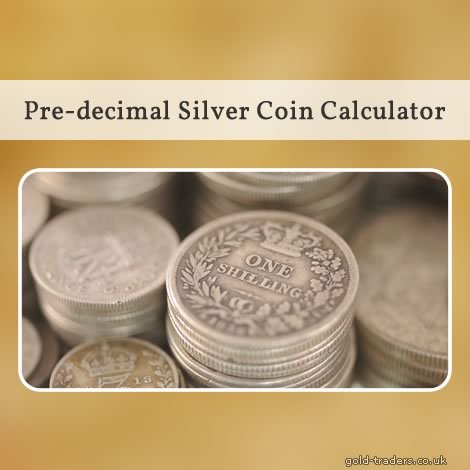 Value your coins with our pre-decimal silver coin valuation calculator

We receive many enquiries from customers who’ve worked out the face value of their coins & had a quote from a local coin buyer & then contact us to get a comparative quote. This can often be quite tricky for us, as we pay by weight and the customer won’t know the weight of their coins & don’t have sufficiently accurate scales on which to weigh them.

To solve this problem, we’ve produced a handy pre-decimal silver coin valuation calculator. All you have to do is enter the face value of your coins & we’ll calculate the estimated value based on our current silver payout rates. If you want to compare the amount we’re offering against a local coin dealer, you can enter their quote into our form and we’ll compare their offer with ours. We’ll even take into account your postage fees so that our comparison is a fair one.

Get the best deal

From our own comparisons, we’re paying anything from 25% to 75% more than high street coin buyers. Our rates are clear and we pay out on the day we receive your coins.

All silver coins minted from 1920 to 1947 contain 50% silver. The remainder of the alloy mix is mostly copper with a small amount of zinc and nickel.

Due to the increasing cost of silver, the Royal Mint debased all silver coins in 1920 from 92.5% silver to 50% silver. From 1947, silver was removed entirely from all coins and replaced with a copper / nickel alloy mix.

How much is rose gold worth per gram?

The colour of gold is altered according to the ratio of copper, zinc and silver added.

This pyramid illustrates how the colour of gold is altered. Gold jewellery is typically made from an alloy (mix) of the following metals:

It’s worth noting that white gold isn’t truly white, it’s still a very pale yellow. The perfect silver/white appearance of white gold is achieved by giving the item a plating of rhodium. So, bear in mind that over time that rhodium plating will wear away and reveal the true colour underneath, at which point you’ll need to get it re-plated to restore it to its original colour. If this is likely to be an issue, it’s probably better to consider having the item made of platinum or palladium instead.

The value of 9ct rose gold per gram

Like 9ct yellow gold, 9ct rose gold contains 37.5% gold. A typical piece of 9ct rose gold will be made from the following alloy of metals:

Gold-Traders is currently paying £ for all 9ct gold.

The value of 14ct rose gold per gram

Gold-Traders is currently paying £ for all 14ct gold.

Please be aware that 14ct gold is very popular in countries such as Greece. However, whereas jewellery purchased in the UK is subject to very strict hallmarking legislation that guarantees the purity of the item, such rules do not exist in Greece. Through our own experience, it appears to be common practice for a piece of Greek jewellery that’s stamped as 14ct gold only to contain between 50 – 55% gold.

The value of 18ct rose gold per gram

Just as 18ct yellow and white gold contains 75% gold, so does 18ct rose gold. The remaining 25% of the alloy is mostly copper with a very small amount of silver and/or zinc.

Gold-Traders is currently paying £ for all 18ct gold, for both hallmarked and non-hallmarked items. 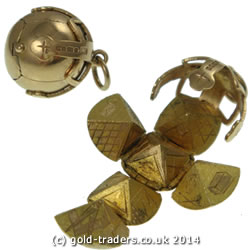 A Masonic jewel, ring or fob will have been a treasured possession by its owner. When such items pass to family members, they are often disposed of, as they may have little meaning to their new owner.

Commonly made of gold and / or silver, when such items pass to family members, they often, sadly, find their way to scrap gold buyers who are purely interested in their metal content. Inevitably, this means the item will be melted down and lost forever.

If you are considering selling any Masonic jewellery, please contact us first. Not only will we pay higher than ‘scrap’ rates for any Masonic items, we’ll also ensure that Masonic items are given a new home – which is what the original owner would have wanted.

Worn on watch chains from the early 1900’s, Masonic ball fobs are usually made of gold and / or silver. The ball opens out into the shape of a cross.

Worn to signify a Master Mason has held the rank of Worshipful Master, Past Master jewels are often made of gold. A jewel will usually be engraved with the owner’s name.

There has always been a huge array of Masonic jewellery to choose from, from rings, tie pins, cufflinks and watches. As with any other Masonic item, please don’t sell these for standard ‘scrap’ prices as you will receive a much lower price.

Other Masonic items made of gold or silver

It is impossible to compile a full list of all things Masonic as such a list would go on forever! Suffice to say, any item of jewellery, gold or silver that is large enough to accommodate a square and compass will probably have been produced in Masonic form at some time or other.

Give us a call to discuss the sale of all things Masonic. It’s always without obligation and we will certainly offer you far more than other gold buyers. 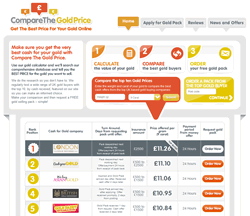 The top five companies listed on this comparison site are all affiliated to the site itself.

A price comparison website is supposed to give you honest and impartial information to help you locate the best deal, right? No so with with gold buying comparison sites.

A recent BBC programme discovered the site they investigated was rigged and listed prices from companies they were affiliated with. Our own detective work has revealed other so-called ‘comparison sites’ can’t be trusted.

The BBC investigation, broadcast on Radio Four’s ‘You and Yours’ programme, followed a number of complaints about the service and deals offered by scrap gold companies on the gold buying comparison website, www.compare-the-gold-price.com.

The company highlighted in the investigation and one of ten then appearing on the compare-the-gold-price.com website was www.cash-for-gold.co.uk. On their own site, cash-for-gold.co.uk promise “more per gram than any other gold buyer”.

However, as the BBC’s investigative journalist discovered, the top listed gold buying companies listed on the compare-the-gold-price.com were all run by, or connected to the same individuals. This meant the comparisons were artificially rigged, and a scam.

Additionally, the prices per gram shown on the comparison website hadn’t changed for several months, despite the actual price of gold fluctuating on a daily basis.

Our own investigations have also confirmed that the owners of compare-the-gold-price.com are also connected or affiliated to the following websites:

Incidentally, the British Gold Refinery – (britishgoldrefinery.co.uk) – has recently been rapped by the Advertising Standards Authority for running misleading pricing information on their website, has been slammed by the BBC TV’s Ripoff Britain programme for dishonest trading and is also is the subject of a Facebook campaign by disgruntled former customers, calling for the company to be closed down.

To give the site a veneer of credibility, compare-the-gold-price.com also listed a price from H. Samuel – a well-known High Street jeweller, and a name the BBC’s callers recognised and trusted. They said that because H. Samuel was on the site, they felt the comparisons would be valid. In fact, H. Samuel was horrified when the BBC contacted them; the company hadn’t given its permission to be on the site, and in fact hadn’t provided an online gold buying service for over a year. The price couldn’t possibly be genuine and was obviously a fabrication intended to make the other gold buyers look more attractive.

Not to be trusted

H. Samuel’s spokesman said the company would refer the matter to their legal department. Interestingly, H. Samuel no longer appears on compare-the-gold-price.com’s website, which now quotes a price from Tesco Gold Exchange. Again, this is presumably without permission, as the price per gram shown on the comparison site is not what Tesco Gold Exchange is actually offering (at the time of writing this article).

It wasn’t only the prices received from cash-for-gold.co.uk that gave the Radio Four You and Yours callers cause for concern. In each case, they’d had to threaten legal action either to get a price, or to get their gold returned. One caller admitted she accepted what she knew was a very poor price from cash-for-gold.co.uk, because she feared she’d never get her gold back at all. And remember, the other top three companies on this so-called comparison website were connected with cash-for-gold.co.uk – so you could expect a similarly poor response from them.

Our own researches have shown this problem isn’t isolated to compare-the-gold-price.com. If you dig deeper, you’ll find most of the gold buying comparison sites are either affiliated to, or receive income from those sites it lists. For example, the comparison site comparethegoldprice.co.uk lists goldrefiners.co.uk as their top paying company. Not surprising when you discover those two sites are connected!

Another point to note is that the gold buying companies appearing on similar comparison sites generally pay commission for referrals. That’s typically £20 – £30 per referral, which goes to the comparison site owner and is inevitably deducted from the amount they’re prepared to pay you for your gold.

How to find a better price

So what’s the answer? Quite simply, if you don’t want to be scammed, or you want to achieve a fair price for your gold, don’t bother with gold buying comparison sites. Bullion dealers, such as Gold-Traders (UK) Ltd don’t appear on any comparison site because:

In short, you’ll be rewarded with a better price and a higher standard of service than you could ever expect from a comparison site.

How much is 14ct gold worth per gram? 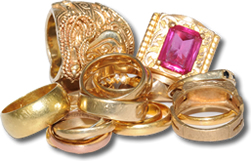 You probably already know that the carat (ct) is the unit used to denote the purity of gold alloys. The higher the number, the more pure the gold, i.e. the ‘gold’ alloy has more gold content and fewer other metals. In the USA, it’s spelt ‘karat’ (kt).

The formula used by the gold industry measures carat purity as 24 x the purity by mass. This means that 24ct gold should be 100% pure or fine gold (in fact, for complex technical reasons it’s 99.9% fine gold by mass). So 14ct gold is 14 parts gold, 10 parts other metal. In percentage terms, that’s 58.5% fine gold.

The scrap value of 14ct gold

Gold is combined with other metals to alter the colour and the hardness of the finished product. You’re most likely thinking of selling your scrap gold jewellery, so let’s focus on that.

14ct gold is sometimes used for men’s rings, as the higher carats such as 22ct and 24ct, while more valuable, are considered too soft and less able to withstand prolonged wear. There’s actually a measurement for metal hardness called the Vickers scale, and 14ct gold is in the 100 – 165 HV scale, depending on the other metals used.

14ct gold is a popular purity in countries such as Greece and Italy. Customers should be aware that there is no official guarantee or hallmarking standard in these countries. In our experience, items marked as 14 carat (14k) from Greece are often of slightly lesser purity – around the 55% purity mark.

So, now you know what your 14ct gold is made of, what’s it worth?

If you weigh your scrap 14ct gold, you can then use our online calculator on the right of the page, to get an accurate quote. Look at our page about how to weigh your scrap gold, but don’t worry if your own scales aren’t that accurate – we will use our calibrated and Trading Standards approved scales to determine the exact weight and make sure you get an exceptionally good price.