Company behind CashMyGold.co.uk to be struck off Companies House register 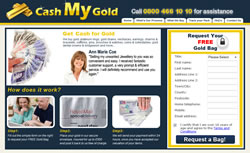 Financial website ThisIsMoney.co.uk reports that Bullion Buying Limited, the company behind the CashMyGold.co.uk is set to be struck off the register of companies at Companies House for failing to file its accounts on time.

Incorporated on 23 July 2009, Bullion Buying Limited has yet to file any accounts. Undoubtedly, the company will now be subject to substantial late filing penalties, levied by HMRC and it’s likely the two directors may also face prosecution.

CashMyGold.co.uk have had the unenviable reputation of paying some of the lowest rates in the market. An undercover Which? investigation revealed they offered the lowest cash amount for sample items, sent to six different companies. They purchased six identical lots of jewellery, consisting of three items with a combined retail value of £729. Of the six ‘cash for gold’ companies they used, Cash My Gold offered the lowest amount, a paltry £38.57 for everything. 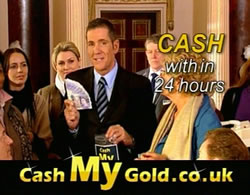 Using TV personality Dale Winton to front their expensive advertising campaign, they have also been subject to an Advertising Standards Agency adjudication in relation to misleading advertising.

As we’ve said before, like CashMyGold.co.uk, beware of any ‘cash for gold’ company that fails to clearly state the real price they will offer for your gold. There are now a number of companies that have ‘calculators’ on their sites that provide so-called valuations. However, dig a little deeper and you’ll discover hidden fees in their Terms & Conditions or that the ‘valuation’ is simply an estimate, which is not binding.