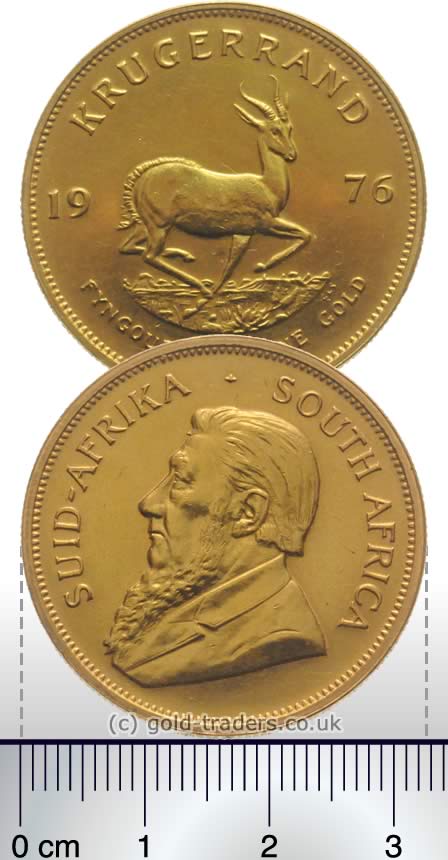 If you are looking to purchase Krugerrands, please click here where we sell them at a very low margin over the gold 'spot' price.

Intended for use as a common coin, the Krugerrand has been minted since 1976 using 22 carat gold alloy to make it stand up to the rigors of daily use.

Being one of the first bullion gold coins, the success of the Krugerrand inspired many other countries to mint their own gold bullion coins, including the Canadian Gold Maple Leaf, the Australian Nugget, the American Gold Eagle and the British Britannia.

The Krugerrand is minted from a 22 carat gold alloy which uses 1 ounce of pure gold and 2.826 grams of copper. This is the same alloy used in English gold Sovereigns and is often called "crown gold". This gold-copper alloy makes the Krugerrands more durable and also gives the coins their orange tinted coloration.

The Krugerrand takes its name from the Boer statesman represented on the obverse design, Paul Kruger. Kruger spent four terms as the president of the South African Republic and was thus honored on the Krugerrand coin.

The South African Krugerrand is minted in four denominations. These are 1/10 ounce, 1/4 ounce, 1/2 ounce and 1 ounce. They bear face values of 1 Rand, 2.5 Rands, 5 Rands and 10 Rands respectively. They are also made available for purchase at a slight premium over the current gold spot price.

The South African Mint Company creates a small number of limited edition proof Krugerrands each year for sale as collector's items. Proof Krugerrands are priced well above their bullion value and the only difference between these coins and the regular Krugerrands is the number of serrations on the edge of the coin. While proof coins have 220 serrations a bullion coin has only 160.

Many companies around the world are offering silver Krugerrands for sale. These are not real Krugerrands. As a matter of tradition, Krugerrands have always been minted in gold and the South African Mint has not sanctioned these counterfeit coins. In fact, they have issued a statement that silver Krugerrands have no legal tender value, are not official and are not even real coins. Silver Krugerrands are novelty items only and their only value is their silver content or collectors value.